Bryce’s last name was given as Kiley in 11.3

Oh. Right, I forgot about that.

Please ignore those complaining about your postponing. I’m pretty sure they’re the minority and the majority of us know that life/college/etc come before a Live Blog you’re doing as a hobby. I’d rather you keep the tentative “next chapter” scheduling so I know when to check in next, even if that often leads me to a “next chapter delayed” announcement.

Yeah, I honestly don’t get a lot of these. It’s to be expected that I’d get some, really.

To be clear, I wasn’t seriously considering getting rid of the #next posts. I was just making a point about how postponing wouldn’t even be a thing if you guys hadn’t asked for those posts in the first place.

In the future, I’d really prefer that you just eat rude asks (or answer them yourself on this blog saying that they’re rude). 😦 I really don’t like seeing Krix deal with that.

I think I’d prefer that Sharks didn’t do that, but I might not answer them.

Hey Krixwell, thank you for what you do and dont get discouraged just becourse some people dont understand what a prediction is – i quite like your #next updates and still dont mind if you have to postpone 🙂 As for a question: Does it bother you that people told you beforehand that their will be 8 Interludes? That seems like a spoiler in itself to me. Also please do your Arc thoughts before the Interludes this time (and after) 🙂

Generally, I would’ve preferred not to know that so far in advance, yeah. Though at least this way we don’t end up with a series of “are we there yet”s as far as Arc Thoughts go. 😛

A good compromise would’ve been waiting until about now – or even better, after the first of the Interludes – to tell me about the eight Interludes.

No hard feelings, though! It’s fine. 🙂

Don’t worry, this is a special case. Also, I’m doing both before and after, and in both posts, I will be keeping in mind that they were supposed to be a whole. If it makes you feel better about it, you can consider this first one “Mid-Arc Thoughts”.

So, now that you know more about Cauldron. I’m really curious to ask what theories and expectations you had about Upsilon turned out to be wrong.

The main one was that they’re far more commercial than I had expected. It surprised me far more that they sell the powers than that they do science on human test subjects and keep some of them as their private army.

I basically expected them to be unscrupulous scientists first and foremost, but instead the business aspect seems to be more prominent.

Then again, the business aspect wouldn’t be possible without the unscrupulous science.

I’m sure half a dozen people are telling you this, but “zaydee” is Yiddish for grandfather. The implication is that Charlotte is Jewish (or at least, part of her family is).

Oh, and by the way – as Minda’s ask screener, I’ve seen plenty of asks where people have been like “I’m sure lots of people are saying this” but been the only one, or one of surprisingly few. However according to Sharks:

Sharks: This anon is actually right on the money. Including theirs, five other people gave the same thing.

You should consider placing a bet on one of those “how many things are in the jar” contests. 😛

D&D player? Nice! What do you play? Also if you enjoy RPGs, there is a Worm RPG, but you shouldn’t look it up until you’ve finished the story because spoilers abound. 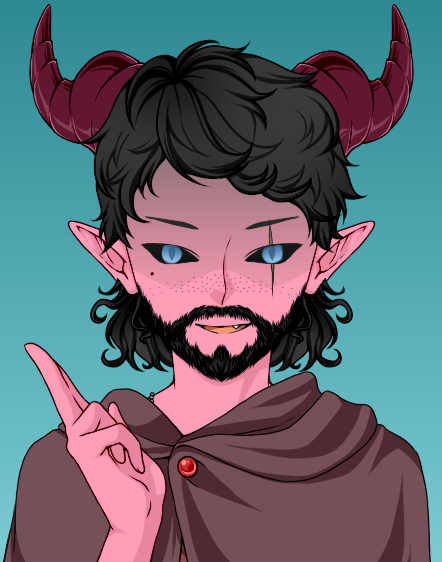 This is his true appearance (made with this character creator), but he has a habit of constantly casting disguise self to change how he looks, so you’ll probably only see him like this while he’s sleeping. (In which case he’ll also be wearing a blue nightcap that gives him pleasant dreams.)

Icarus is a charlatan first and a warlock second. He’s spent most of his life tricking people, so he is very aware of the existence of people like himself or worse, and has a hard time trusting anyone at all. Despite this, he’s fairly jovial, and his main goal is usually to have fun, preferably without some demonic teacup breathing down his neck. 🙂

Hey, Krix, just wanted to let you know how much I appreciate you doing this. I know some people are always on you to get more out AS FAST AS POSSIBLE!!!, but seriously, it makes the day better even when it’s just occasionally. I work a lot, and don’t get a lot of free time, so I just wanted to tell you not to try and burn yourself out putting out more – whatever comes is awesome enough. 🙂

I saw mentioned that you know there are a bunch of interludes coming up. If I remember right, Wildbow wrote one interlude a day as a special thanks to the early Worm supporters that were reading as he released chapters. So, I know the answer is most likely “no” which is completely understandable and okay, but would you consider a one a day marathon for the interludes reflecting his one a day chapter drops? If it sounds fun, might be a thing to try. Love your liveread, much thanks for sharing.

I actually already tried this! Back when I hit my first anniversary just under two months ago, someone suggested attempting a marathon inspired by his (I was later informed about the eight Interludes being that marathon). I did give it a shot, but gave up after about half the week.

Re your immediate reaction to 11.8’s last line “And then the next paragraph we learn the Slaughterhouse just went public or something like that?” Scroll down slowly and carefully to read only the first four comments in the thread for this chapter…

First! Also, that sounds like an invitation to something monumentally horrible to happen.

Hah, yeah. The end of 11.8 may be a high note, but it does still carry a strong sense of tempting fate. 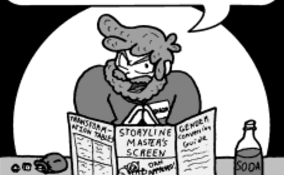 Ahaha, the authorial smile and nod…

“everything just might work out.” – Which translates into: In what way may we kick Taylor’s puppy this week?

You would think by now that Taylor would have learned to stop saying stuff like that.

I was half expecting Wildbow to chime in again with another smiley face.

Have we really seen Taylor with this sort of optimism before, though? If anything, it seems like whatever is going to snap her out of it is going to drag her back to her existing worldview.

Unless of course it’s particularly bad, such as the Slaughterhouse Nine killing Danny. That’s definitely a thing that might happen, and if it does… Taylor definitely ain’t gonna like it.

it’s high noom:
take “you do you” very literally

Oh look, another phrase for a certain miss Mcabee to be quite careful with.