To elaborate on my list of “Groundhog Day,” type powers: in the Stanley Parable, every time you reach the end of a path, you get reset back to the beginning of the game – however, some of the storylines you can follow take place over multiple resets. One of them even ends with you repeatedly throwing yourself off of a tall staircase until you die. In a number of racing games, the player is given the ability to rewind a few seconds to just before a crash.

I’d say the resetting thing in the Confusion Ending is more on the narrator’s game powers than on Stanley, and in the Zending it’s not resetting each time you throw Stanley off, it’s just him surviving the fall a few times. But it does show that the Narrator doesn’t have complete control over resets and that in most circumstances (as in, anytime except in the Museum ending) Stanley dying prompts one, so maybe you have a point there.

Hey Sharks, Krixwell may already be aware of this but just in case he isn’t: The current “Between 16.8” post linked from the front page of the blog (and on Twitter) doesn’t seem to exist. Might want to look into that.

I don’t have any problems getting to it on my end, neither on the site nor in the editor. Is it still being a problem on your end?

Thomas Calvert or as his friends call him, Big Cal. 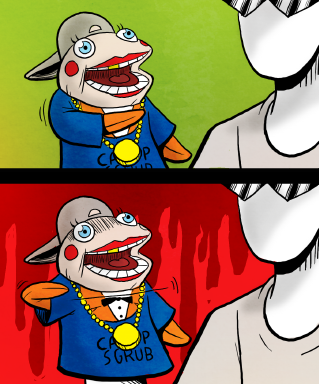 MSW usually stands for “multiple stab wounds”. Also, Coil’s interlude pretty heavily implies that he bought his power from Cauldron (“And he still owed a favor, even now, up to a week’s services. He couldn’t be sure if he was powerful and secure enough to fight back if they demanded too expensive a price, or too much of his time at a point critical to his plan.”), so he most likely didn’t trigger in Ellisburg.

Right, whoops. That slipped my mind when I talked about him potentially triggering.

Though that does add some context for why he ended up dealing with Cauldron. We learned about his attitude towards powers and belief that maybe he just couldn’t get them through a trigger event (I still question whether the “potential” is really a thing, but it’s a reasonable assumption for the characters in-universe that it is).

Thomas Calvert is introduced as someone who a) doesn’t care about the consequences of his actions and b) believes that powers mean you get to decide what rules apply to you. And both of those are exactly how Coil uses his powers. Ladies and gentlemen, Wildbow’s foreshadowing skill.

The reason Calvert got an “honorable” discharge is the same as why Piggot got promoted to PRT director. The PRT was very keen on not letting out how much of a shitshow the operation in Ellisburg was. And in addition to wanting to keep the survivors quiet there’s the fact that giving him a dishonorable discharge would have probably meant procedures like trial and stuff, and they did not want the attention.

Yeah, that sounds about right. Still incredibly ironic and kinda fucky when you know the backstory… Can you imagine Taylor learning of what he did to earn that “honorable” discharge? She might be quietly fuming about that for a week.

If it turns out Coil really did die in that explosion I hope you’re prepared to apologize to poor Mr. Calvert for the baseless accusations.

If there’s anyone with a name ending in -ert here that I should apologize to, it’s probably Stephen Colbert.

Huh. I’ve been alerted about new Wildbow work liveblogs before, but this is the first time it’s been a blog I already followed and had notifications enabled for.

So, one of the Homestuck liveblogs I follow just announced they’re picking up Worm as a second liveblog on the side, as a way to avoid burnout on each thing by switching it up and trying to stick to a schedule. Apparently they’ve read the first four chapters and decided they had to liveblog it.

I won’t lie, I’m not confident that it’s going to work out for them based on the blog’s track record with Homestuck, but it seems worth a shot. If it works, that’s great, and if it doesn’t, well, at least some chapters worth of Worm liveblogging will probably still have come out of it.

If you’re interested, go check out @imdoingthismspaintadventure on Tumblr.

(I won’t be following along with their Worm blog, as much as I do wish I could; if I did, I’d catch any spoilers they know/learn that I don’t already know. I’ll also unfollow them if it becomes necessary due to Worm stuff in their Homestuck bloggings.)