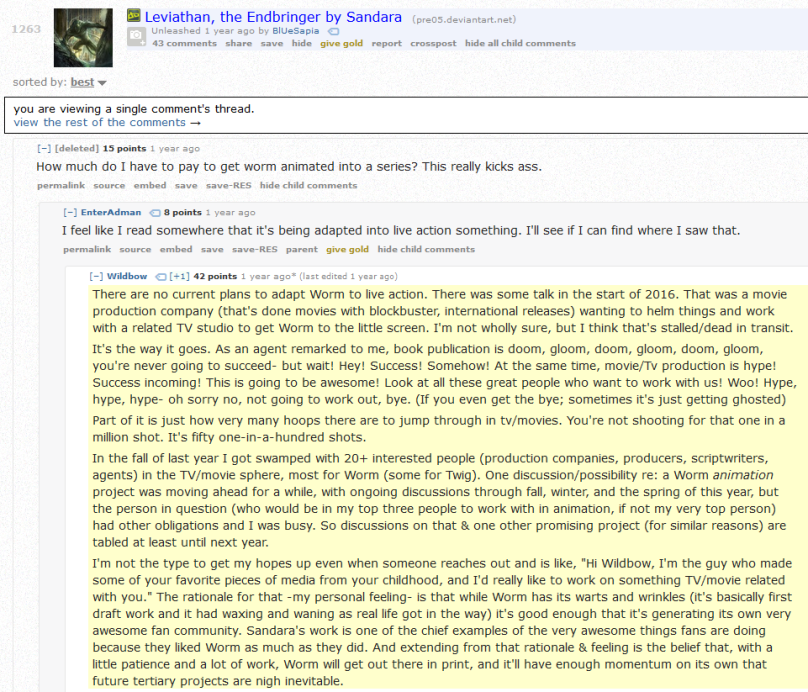 Ahh, well, it’s a shame none of it seems to be working out, but hey, people in the business being interested is still a pretty good start!

And if it were to end up in TV form (movie sounds like a bad idea due to the amount of stuff that would need to be either cut or crammed), we’d want it to be done right! Maybe Netflix would be a good company to have in on this, at least on the quality front.

From what we know there is a possibility for Worm being traditionnally published or adapted to a screen, big or small. I believe it’s nothing serious though. There are like… people who look for ideas, I think people like those are the ones who contact the Boar to talk with him before making pitches to their respectives studios. I think we’d heard more if it had gotten past the pitch stage.

That makes sense. The executives probably don’t have the time to go read enough of Worm to get a good idea of how good it’d be as a TV series, or harbor doubts that it’d work out with regards to making a good adaptation within the budget and time constraints, that kind of thing. It’s a shame, but it’s fairly understandable.

Re: Scotland, you were probably thinking of haggis. Re: Worm TV show, yeah it’s been discussed. There’s some hurdles to making it happen, partly because the story itself is hard to adapt in some places (how would you film the miasma?) and also because Wildbow doesn’t want to compromise the quality too much. There’s a fandom meme about a publisher wanting to change the first line to “‘Take that you worm!’ said Emma.”

Hmm. Filming the miasma might be tricky, yeah. Do you film what’s literally happening, or what Taylor thinks is happening? Do you have voiceover for Taylor’s thoughts (though that might be needed in more places)?