About Bakuda’s heat sensor and Grue’s darkness. It was explained in earlier chapters that what Grue does is, in fact, way more than blocking light. It messes with pretty much everything: light, sound and radiations, including radio waves and more importantly in this case radiating heat. Tattletale even guessed that it could stop nuclear radiation.

Grue’s darkness can block light. It makes sense that it applies to more than just visible light, it extends to infrared too.

Grue’s power dampens/blocks sound and all forms of radiation, remember? So the heat-vision only worked when he wasn’t using it.

“why did it fool Bakuda? She’s got a heat tracker in her goggles, according to Tattle, so why didn’t she see that the shadow feint wasn’t actually Grue?” Remember that according to Tattletale Grue’s darknesss affects *all* forms of radiation, including infrared.

I guess what tripped me up was that I’d taken Tattletale’s bit about the heat tracker to be an explanation of how Bakuda could herd them as efficiently as she did – I connected it to my preexisting theory that she had a way to see them in the darkness a little too quickly.

Hello! Guy who informed you about the official name pronunciation here. Actually, wilbow has a no spoiler policy and all spoilers or theories that have been revealed right are suppressed, so the comments are majoritarly spoiler free, even if one or 2 spoilers may have slipped beetween his watch.

You should be safe from spoilers in the comments. The only spoilery comment I found while rereading Worm was at about Arc 20, so…

Just thought I should mention that the comments are pretty spoiler free, I read it all after it finished and never saw a spoiler. Plus, the comments are damn good. Anything by PsychoGecko is pure art, though I think he starts commenting a couple of arcs ahead of where you are. But if you’d rather not risk it, it’s not really an issue.

Good to know! Maybe I’ll take a chance and look a little deeper once in a while.

Not wanting too much unscreened input, even from people at the same point in the story as me, is still a thing, but a much less important one than plain spoiler avoidance.

I will say “theories that have been revealed right are suppressed” concerns me, though. With that knowledge, any theories left in there is basically confirmed wrong, aren’t they? That’s a type of spoiler in its own right.

Given that you’re not going to school, I think you’ll be happier doing a chapter a day. 🙂

So Krix, what are you doing now that you’re done with school?

Yeah, now I actually have time and energy for it way more often. You may have noticed that even besides the thumb criminal 2x combo on Thursday, my rate has become significantly higher and more reliable since the end of school.

Currently, my days are spent relaxing, for the most part, because I’m a lazy sack of potatoes, and doing things online like chatting with friends, watching videos or liveblogging.

Coming up, though, I intend to finally start learning how to drive a car, something I’ve been putting off for years because of school. 🙂

When fall comes around, I’ll almost certainly be starting online history studies. This’ll allow me to live at home for another year and a half and give me the opportunity to get my shit together before I have to move out to go to a university.

(Although with the change of my interests into history and philosophy rather than math and physics over the last few years, the closest university, which I could feasibly commute to and from on a daily basis, now actually has courses that interest me, so I might not have to move as far as I initially thought.)

noun: one who breaks rules of thumb

Hey, my most favorite moose! ^_^ Just wanted to say it’s freaking awesome how fast you’re putting these out! Don’t sprain your reading muscle! (Although I can definitely sympathize with wanting to read more when the story’s getting good!

[reblogging the post with all the asks about heat vision]

It just occurred to me that most of the time she was doing that, the Undersiders themselves weren’t actually shrouded in the darkness. Things are starting to make sense.

Jesus H Christ what the heck is wrong with this thing? The text is tiny, scrolls off the screen, and any pictures that show up are ballooned to ridiculous sizes.

Why did you allow them to use such an irritating theme for the blog?

I’m using one of the default themes because I like the simple look, and the fact that you can actually find the links. I’m willing to change it if I find a theme I like, but I simply haven’t looked yet.

I’ve never had the problem described in the second ask (chronologically the first) [I made the order chronological in the transcription] with the text “scroll[ing] off the screen”. I guess I could see the ballooning pictures being a thing, though, and text size preferences are very subjective.

Has anyone else been having similar issues, technical or just generally with the look of the blog?

But seriously now, I have a suggestion I’d like to see. You could try editing your blog style so all quoted text is displayed differently from your own (different font, or size, color…), so at first glance you can tell which is which. It’s not that it’s hard to tell apart text from commentary, but sometimes I’m reading fast and it trips me up.

“One, firing a loaded gun straight up into the air is a very bad idea. The projectile will come back down at roughly the same speed it left the barrel with, at an unpredictable location.” It’s been a while since I took physics, but I’m pretty sure that a bullet fired straight up in the air will rise until it loses all of its upward velocity, and then accelerate downwards until it reaches terminal velocity.

Hm… I’ll admit air resistance is one of my weak points within physics, but wouldn’t it make sense to design a bullet so that terminal velocity is as high as possible, ideally higher than the barrel speed? It is going to be colliding with a lot of air in normal usage too.

Then again, you don’t know which side will point downwards when it comes down – it could be the aerodynamic pointy end, it could be the cylindrical side, it could be the flat back, or a combination of these. Quite possibly spinning. And this is all before considering whatever effects wind may have on the vertical velocity.

So yeah, you’re probably right. Still, though, I’m pretty sure a bullet coming down at “just” its terminal velocity is still gonna be pretty damn deadly if it hits you.

I’m loving this slippery slope. One day you break your rule and decide you’ll post two days in a row. That very next day you’re doing two chapters back to back. Next thing you know, you’ll be like “Sleep? Nah, better do my fourth chapter of the day”, haha.

This party never stops. Time is dead and meaning has no meaning. Existence is upside down and I reign supreme – welcome, one and all, to today’s 27th chapter of Worm! 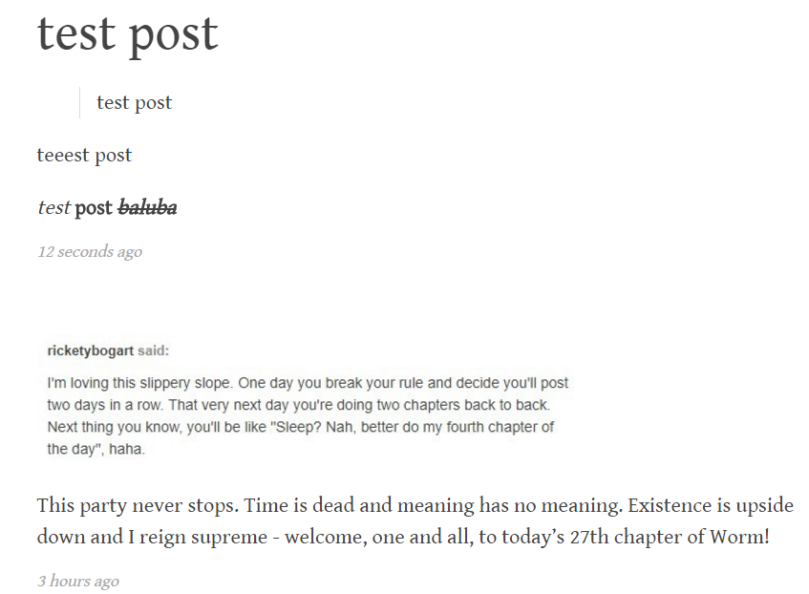 So, due to the asks I got about the theme of the blog, I’m considering alternatives. In particular, there’s this theme called Ashley that seems nice.

I’d make the colors more like they currently are (it says it supports custom colors), but other than that, my only issues with it are that the links end up at the bottom and that there don’t seem to be reblog and like buttons (or tags) unless you go into the individual post pages.

Thoughts? I’ve made a poll here, but more fleshed out thoughts are also welcome through the ask blog.