More fun organized crime facts: The whole ‘stripped naked to keep the drugs off of your clothes’ thing is also a thing that happens. You might see it in US movies sometimes, IE American Gangster.

Hey Krix, I made you a thing! This userscript hides comments that were written more than 2 days after chapter release (preventing you from being spoiled by from-the-future readers) and hides character name tags. To use it, you need to get Greasemonkey/Tampermonkey browser extension and click install. 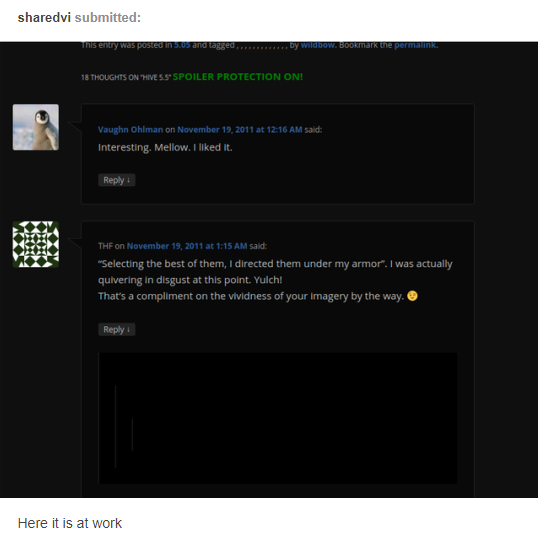 Ooh, this is really cool! I’ll have to try it out.

(#i don’t use Firefox or Chrome

#but there’s something called Violentmonkey for Maxthon

I had four wisdom teeth before this. My wisdom reduction so far should be 25%, not 50%.

I used to be good at math, y’know, back when I had all my teeth.

Someone will need to figure out which arcs were written quicker than that and warn you about them, though, because there are a few chapters released less than two days apart.

You might still want to be a little careful around the comments. Even if they’re posted before the next chapter comes out, they could still have references to stuff you’re trying to avoid, like character tags or word of god comments.

Shame to waste the time and effort Sharedvi put in to make the script for me, but I guess comments still aren’t safe. Fair enough.

Hm… I figured I’d install the userscript nonetheless, to at least protect me if I happen to look at comments by accident. But while there is a ViolentMonkey for the browser I’m using (Maxthon 5), and the script is showing up as installed in that extension’s menus, I’m not seeing any effect on the Parahumans website, and the ViolentMonkey icon isn’t showing a little (1) sign to say it’s running.

It does, however, work as intended in Chrome, with TamperMonkey. I don’t think this is enough of an incentive to switch back to Chrome for the liveblogs, especially considering the comments overall aren’t safe for me anyway due to Word of God or comments about character tags, but it’s neat to see it in action there.

(I’ve also installed a userscript for Youtube to see if it’s a problem with the Maxthon extension itself. That userscript seems to be working.)