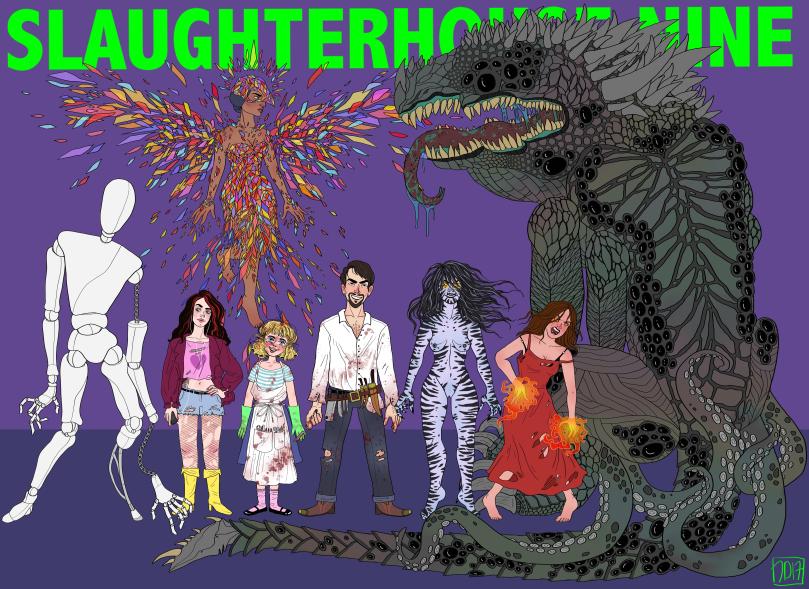 fatsmagoo: Like I was just saying and will likely repeat a lot in this post, Crawler looks freaky as hell and it’s hard to appreciate just how freaky he looks until you see art like this. I love it.

The rest of the Nine also look quite good here – especially Shatterbird with her majestic glass “wings” and Cherish with the most natural pose – but it’s undeniable (for me) that the super-detailed Crawler is the MVP of this one.

(I trust the five-year-olds that surely read this blog about a story that is in no way for kids will take care not to look at Siberian’s naughty bits.)

And then DerTodesbote is here to reinforce it with not one, not two, but three amazing pieces focused on this freak. The shading and details are fantastic, and I love how scary DerTodesbote made him look. 🙂

scarfgirl: I could see this one being used in heraldry. Man, screw lions and dragons, whoever puts this beast in their heraldic achievement is clearly the awesomest noble around. 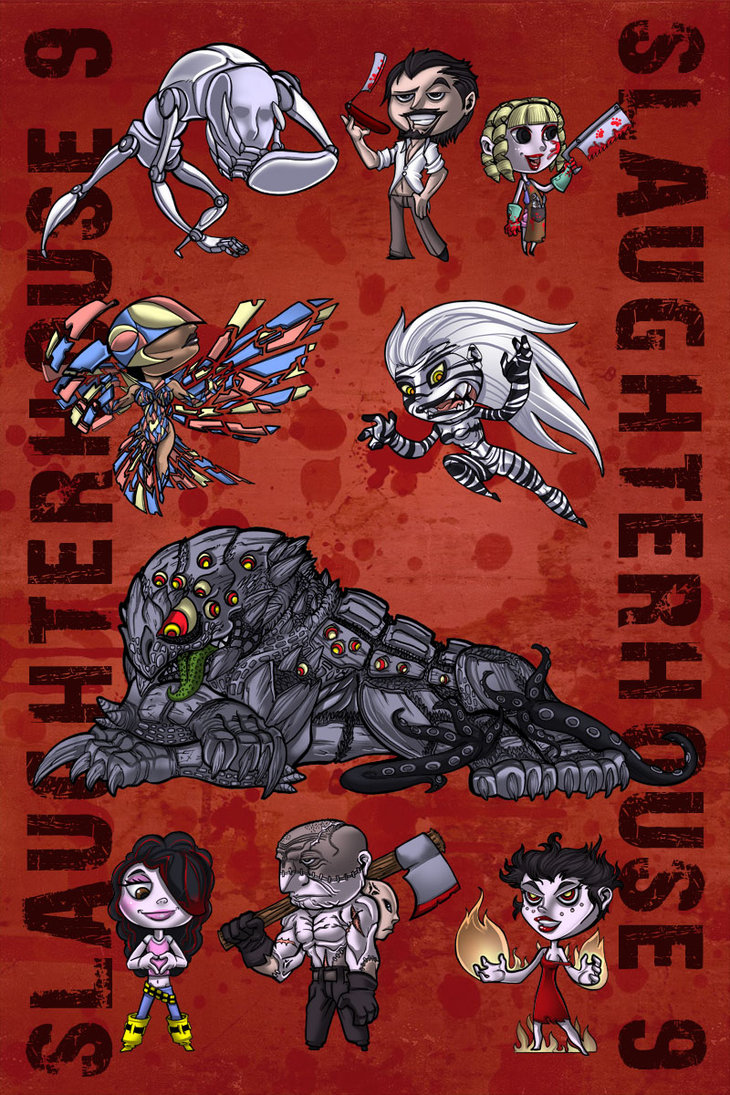 Overall, the style in this one is quite distinctive, with the cartoonish bobbleheads. I like it! Also, I appreciate the inclusion of Hack Job, though he himself seems less excited about it.

Gar-a-ash’s Crawler design reminds me a lot of a t-rex with too many limbs. I suppose that’s not an inappropriate comparison for him – he’s probably just as dangerous, if not more.

I like the scribbly style of his surroundings, highlighting that the focus is on Crawler himself. 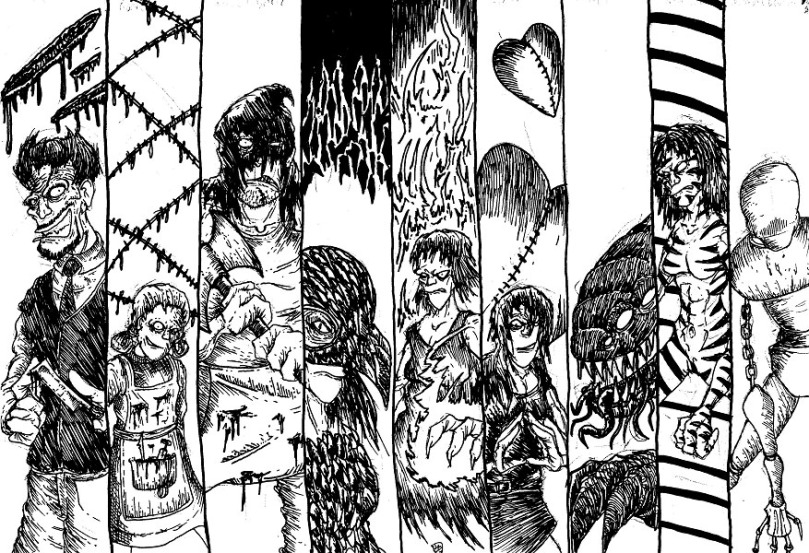 silentstranger: I feel like this style really highlights the monstrosity of the Nine, with the facial expressions. Even Bonesaw manages to not be adorable here, and that’s just blasphemy.

Still, though, that’s not really a bad thing. This is definitely an important side of the Nine, and it’s good to see that represented as well.

Pabel and Nine: Damn, Burnscar looks badass in this one. That’s a bit different of a design than I’ve usually seen, and it’s a really cool one.

All of them look really good – besides Burnscar, I particularly like the expression and hair on Siberian (conspicuously the only one here without a full-body shot for reasons I think I’ve got a good guess at), which is probably the most distinctively Pabel and Nine-ish part of this image. 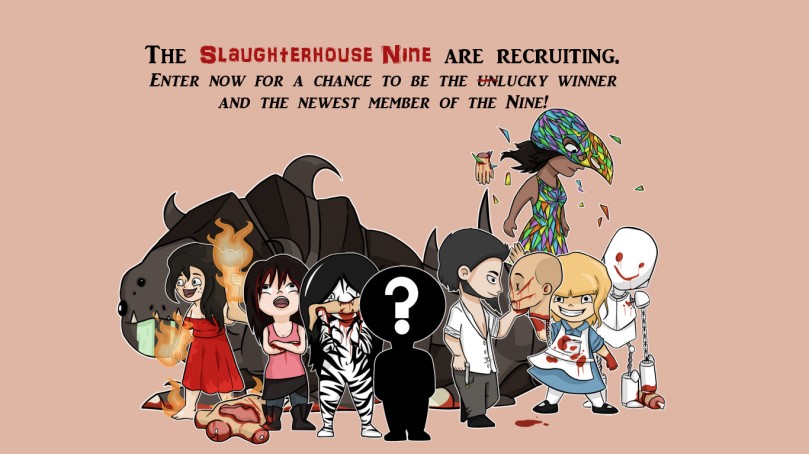 Abyranss: You know, I think I’ll pass. What’s that, Shatterbird? You say I don’t have a choice? Dammit.

…oh my cod this piece is so adorable once you look a little closer.

We’ve got Crawler with an axolotl face, Burnscar being beautifully crazed (in a way that reminds me of someone), Cherish looking so done, Siberian chomping on a leg in possibly the cutest depiction of non-sexual cannibalism ever, Jack staring into the eyes of Oni Lee’s decapitated head like he’s gonna kiss it in front of an erupting volcano, Bonesaw, and Mannequin having a cute little drawn-on smile (probably done by Bonesaw). This is beautiful and I love it.

So yeah, that’s all the fanart I’ve got for now. This was a good batch!

[Between me mentioning “Siberian’s naughty bits” and “non-sexual cannibalism”, I can understand why Tumblr’s bots ate this post in the NSFW purge that prompted my migration. Although it is worth noting that Siberian’s naughty bits are not covered by the purge’s rules by virtue of being drawn and artistic, so Tumblr still fucked up here.]

Uh, I think you’re tagging your current session as “part one”, when it’s actually part two. Unless I’m misunderstanding your tags?

Should be quick to fix with the mass post editor, but still… wow.

Thanks for alerting me to it!

[I don’t normally bring this sort of “hey, here are some tags to fix” asks along in the migration, but this is just too egregious not to.]

My favorite beat in Aisha’s whole interlude is how, when Burnscar asks if it was Jack who attacked Bonesaw, Bonesaw’s response isn’t, “No, Jack wouldn’t do that,” it’s, “No, Jack would have succeeded if he tried.” This from the person who sees the S9 as her family. The S9 are seriously screwed up, man.

Yeah, that’s pretty messed up. I do think that says something about Bonesaw too, even moreso than Jack: She’s not so naïve as to think it’s not a possibility, in spite of her view of the S9. I could actually see Jack doing that if he found a reason to that outweighed Bonesaw’s status as the heart of the team and the risk of retaliation from Siberian, and apparently Bonesaw can too.

(link to original post – please reblog that, not this)

[This is another post that should’ve been safe by the rules of the purge, but which I can’t blame Tumblr for flagging. Especially given that there’s a link in it.]

I’m sorry to be the one to introduce you to this, but I only mentioned that because it’s a Thing™. It’s called “vore” and it’s a kink that’s… surprisingly mainstream and somewhat memetic.

I’m not into it myself, despite any rumors this denial and my insinuation that there’s cute vore might start, but it really would not surprise me if some of the artists that are have in fact managed to make some of their art super cute in spite of (or perhaps to some, through) the subject matter.

I’m sure there are some who would debate the finer points of any distinction there may be between vore and cannibalism (I think I’ve seen the argument that it’s only cannibalism if the person who is eaten is digested? also from what little I’ve seen, they usually go down alive, defying all laws of how much space there should be in the digestive system), but yeah, “sexual cannibalism” is pretty much the gist of it.

Hmm. Jack would’ve succeeded if he tried… Maybe the key to defeating the squishies is to encourage friendly fire, either through accidents, through disturbing Jack’s carefully orchestrated team balance, or through shogi.