Ballistic was the one supposed to kill Cherish, the others had different targets. It was when they didn’t attack the others while waiting on ballistic to kill her, and instead pushing him to do it, that she instead warned the nine after having been waiting a safe distance away.

Ahh, I suppose it makes sense that she might not have time to mess with the others’ emotions after she realized messing with Ballistic’s wasn’t enough. She didn’t think they all were after her, so she may have figured Ballistic’s murderous intent was in spite of the plan.

Figured I might note that if you want to get really nitty gritty, then the damage heat would do to a person is technically based in movement on a microscopic scale, so Siberian being unharmed by Sundancer’s power does still jive with the “immovable object” model on some level. Of course when you get that granular the difference between “immovable object” and “physical form that is fundamentally impossible to compromise” is essentially nonexistent.

I suppose that’s true, and it is something I have given some thought. I’ve been thinking along the lines that heat transfer by radiation (like sunlight) wouldn’t be movingthe atoms directly like heat transfer by contact would. That might not really hold up, though, especially since temperature is movement.

I feel that you are overestimating Lapis power significantly. Lifting the ocean is well into the “Sci-fi writers have no sense of scale” part of the spectrum. Consider for instance both that if she had actually picked the ocean up it should have made a far far taller pillar by a longshot than was shown, but it would still have been as silly to think it could reach even the nearest star as it would be to think Connie could do it by tiptoeing.

It’s also the same sort of thinking that would push Ronaldo into being able to move at supersonic speed (because Lapis could lift Steven to the top of the water pillar quickly, steven could move visibly on said hand and Ronaldo hit Steven with a brick once). Thats just a danger of basing powerestimating on the most powerful feat shown once particularily while involving the entire planet/space.

Instead I would base my estimates on her actual fights with the crystal gems/Jasper both fused and unfused, which would still make her a huge powerhouse by worm standards, outside of the probable reach of the undersiders, but less so.

That is a fair perspective. The alternative is that Lapis is holding back and/or not giving her all in fights like the one in Reunited, after all.

And hey, nobody ever accused this show of being consistent about scale… 😛

More Steven Universe spoilers! Assuming Shatterbird is constrained by the Manton effect, I doubt the S9 (except maybe the Siberian) have enough firepower to even scratch the Diamonds, the things Blue tanked were insane, and I doubt Yellow’s durability is any worse. Even if they only have their hot bods, it’ll still be like fighting 2 even more durable Crawlers (though with admitedly lesser regeneration), rather than Fenja and Menja.

Ehh. I’d imagine Shatterbird and maybe Crawler could top the stuff Blue was hit with tenfold or more. That includes Steven’s bubble attack, which was the only non-barn attack that really fazed Blue in the sequence where the CGs fly past, attacking one by one. (Symbolism, only a diamond can scratch a diamond.)

You’re right, the Diamonds are probably significantly more durable than Fenja and Menja, but I do think you’re overestimating the attacks we’ve seen them at the receiving end of.

“Wait, how is moving her body involuntarily affecting her flight, considering she’s using her brain to do that? Did Regent mess with the nerves in her brain? Can he do that?” I would assume he can mess with at least some of them, considering he can hijack the entire body. But I’m not a neurologist.

Maybe, maybe not. There’s no good reason for his power to not affect the brain when it’s divorced from human ideas, but if he can do that, that’s a form of mind control rather than body control, and he’s been pretty clear on the distinction there.

““Nothing she can’t do outside the bubble that she couldn’t do inside,” Tattletale replied.” Triple negatives and incomplete sentences are hard to parse, but I think it works as dialogue. Just don’t think about it too hard.

How powerful is Scion?

I believe his rating is listed as “hella”.

…incidentally, looking back at old Scion posts, Flechette told us that Scion is “apparently” a Breaker. Maybe that’s because he breaks all rules of the universe that stand in the way of restoring order and/or calm to things? 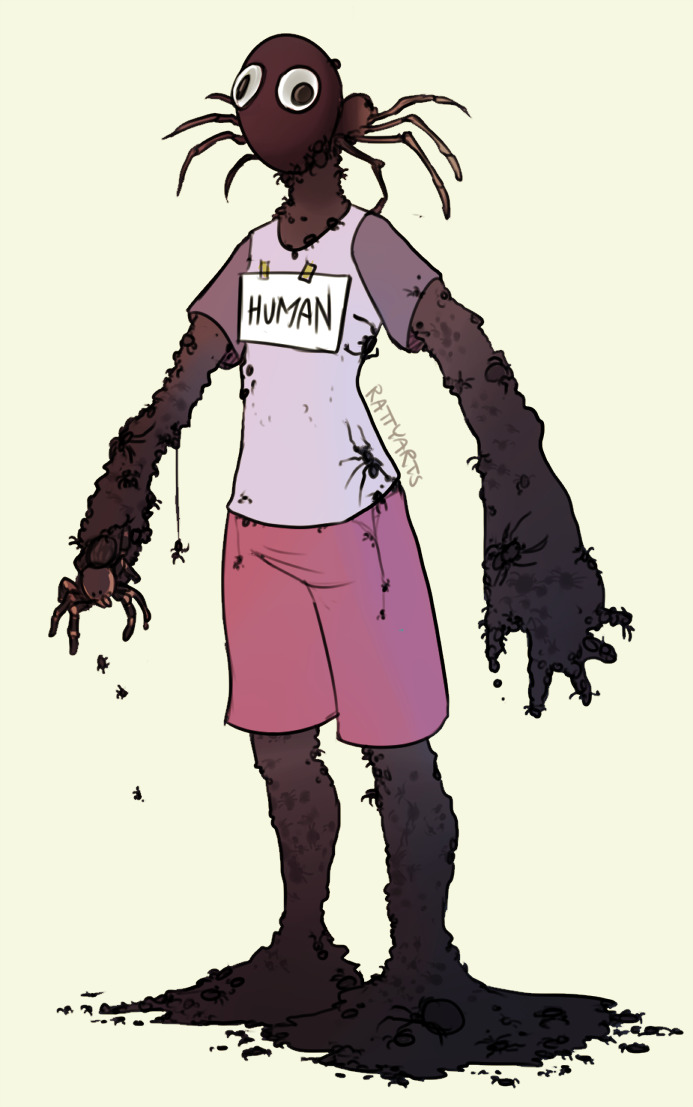 Here’s my long awaited next entry for the monster girl ch-… Huh. My mistake, this appears to be a normal human girl.

Even if this is not a Worm fanart this is still how I picture Taylor’s swarm clones.

Heh, nice! I really like the “HUMAN” note on her shirt. It’s sure to convince Taylor’s enemies to go after the decoys! 🙂

(Especially if it’s in the El Goonish Shive crossover. This kind of thing works there for some reason.)

Personally, I picture the swarm clones as a little more… swarmy? A bit more vaguely-shaped, somewhat thicker in their features than a normal human, looking more like Taylor would with a dense swarm of flying insects around her than a realistically shaped human made up entirely of bugs.

Although I could see her pulling it closer together for her stunt in 13.7 (she was going for drama, and “made of bugs” is more dramatic than “surrounded by bugs”), and I do think this is close to what her little stunt in 7.3 against the Empire 88 goons would look like (see also this post [here], tw: gore).