Tracks from the Homestuck album Strife! as Undersiders:

*: Stormspirit is short and feels more like a build-up to Heir Conditioning than like a standalone song, so I counted them together. Besides, there were seven tracks (unless I discounted Make a Wish) and only six Undersiders.

**: If this were “tracks from Strife! as Worm characters”, Knife’s Edge would go to Jack Slash for reasons beyond the obvious.

***: Make a Wish is a bonus track. It’s hidden on the Bandcamp unless you buy the album, but you can listen to it here or in this full-album video on YouTube.

And yes, this is, in part, a ploy to get you guys to listen to some awesome music. If you haven’t already – I mean, I don’t think this is even the second time I’ve shilled this particular album on the blog, let alone the first.

(And if you have? You should still go listen to it again.)

Asks! And another fun thing I just did that I’ll leave for the end…

The timing of the slowdown has been very unfortunate as it creates the perception that it’s caused by the K6BD patreon liveblog, as though it’s taking time away from the main liveblog. I know that wasn’t at all your intention but it’s a possible reason you might be receiving more pushback than usual (as your twitter seems to indicate).

Yeah, that’s unfortunate. I’m not gonna lie, I have questioned it myself, and whether it’s responsible for the general slowdown or not, the distraction doesn’t help when it comes to getting the Worm chapters out there. At more typical speeds, it wouldn’t be a problem to replace one chapter a month with something else, but when it gets down to three chapters a month and one of them gets replaced with something else, it’s understandable that it gets frustrating for those who read primarily for Worm.

At least I’m beginning to pick the pace back up now, and while the amount of free time I have is going to decrease a bit again soon, it shouldn’t go back to how it was for the foreseeable future.

Can we have more chapters at the pace of the recent ones? I don’t want to seem shitty, but one or two chapters a month is killing me. At this rate Wildbow will be done with Worm 2 before you’re done with Worm.

“pan-uh-see-uh” is official. The Worm audiobook site has a pronunciation guide based on information from Wildbow.

Damn. Well, I suppose it’s to be expected that Wildbow would pronounce it the way the word is supposed to be pronounced in English. It’s not his fault it’s a horrible-sounding pronunciation of a cool-looking word.

“But hey, he always did have a talent for getting more things (Colin Interludes) into other things (the story) than there should reasonably be room for, too…” You know, I remember someone posting video of their meta-narrative theory for Worm (some spoilers in the video I believe) and how the powers can represent litterary techniques and the characters with those powers impact the story. Like Tt being exposition, and Imp being whitholding info. Arms/Defiant fitting more would fit in nicely…

At least that one still sounds alright.

Just sharing in case interested and didn’t hear, Wheel of Time is being adapted for TV on Amazon.

You almost got there first! I found out about that like a week or two ago. I’m very interested to see how it goes, especially considering that shortly before I found out about it, I came to the conclusion that TV really isn’t a good medium for the story. Wheel of Time relies a lot on inner thoughts and conflicts that are invisible on the outside. That’s crucial to many of the central themes.

That said, perhaps they’ll surprise me. The showrunner seems to know what he’s doing, judging by an interview I read with him, so I’m cautiously optimistic.

Incidentally, while discussing this with someone, I pointed to comics as theoretically a better visual medium for the story. Since then I’ve started reading the official comics (huge shame those only cover Eye of the World and New Spring – I hope they make more at some point), and I think I was right about that observation.

Certain anime tropes relating to inner monologues might also work in the story’s favor. Specifically, what I’m picturing reminds me of JoJo, and that connection raises all sorts of weird mental images.

“a particularly determined hero with this power might seek out death anyway” The very first thing I’d do if I triggered with that power was figure out a quick, foolproof, painless way to kill myself. There are so many terrible things that can happen that don’t actually kill you.

Imagine being up against a superhero you don’t know the power of… you’re winning… and then they pop a cyanide pill from a compartment at their wrist.

Or perhaps just press a set of multi-finger buttons in the palm of their hand to inject themself with poison.

Hm. I won’t claim to know all of these, but some of them seem like a stretch to consider powers. Undertale, sure, saving is a whole plot point there, and from what little I’ve seen of it, Life is Strange is all about this kind of power. But Stanley Parable? Racing games?

“The Nine wouldn’t be so kind.” You a poet and don’t know it. (Not sure if it actually rhymes without a southern US/AAVE accent, but eh close enough.)

Huh, so the d in “kind” is silent in that accent? Neat. “nd” comes out as just “nn” in Norwegian too, most of the time. Although my particular dialect makes “nn” more of an “ñ”, and that applies to “nd” by extension.

So, I don’t know if the screener will let this through, but fun fact; everything that happens between 15.5 and the end of arc 19 happens in 4 days in story.

Dayum, that’s a hell of a pace. Haven’t seen that kind of pace since the beginning of the story, and even then it took longer to get from Arc 1 to Arc 4.

Regarding Groundhog Man: He also has to deal with his teammates sometimes murdering him because they are dissatisfied with the day’s events.

Not that powerful? Taylor can lethally poison 25 city blocks worth of people while drinking tea, Regent has a member of the slaughterhouse nine and can get access to any power or clearance level within the city in a couple of hours, and Rachel is tough enough to survive for years with a public identity and no home without ever getting captured by the heroes.

Taylor doesn’t recognize Portal 2 or Bomberman but knows what Metroid is. I wonder why?

There were all those new Merchant capes, but, uh, haha, not anymore for the most part.

1) Yeeah, and then when he gets irritated at them for it, they don’t remember doing it.

The separate one and 3) Ah, right. I never learned who all were in the Merchants before Leviathan, I think, so they didn’t register in my mind as necessarily being new.

4) To be fair, it’s possibly to not recognize a reference even if you know what the source material is (you may recall that I didn’t catch either of the Portal and Bomberman references, though I’m familiar with both and the Bomberman outfits seemed familiar). Also, Portal 2 came out after Taylor joined the Undersiders. Also: 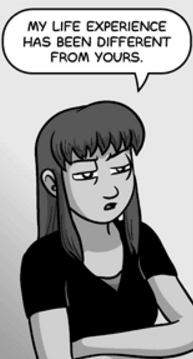 Oh, and Taylor didn’t mention Metroid, that was me.

Grace: My life experience has been different from yours.

I’ll believe that when I see it… oh wait

Taylor saw Coil’s body come apart in pieces, that seems pretty conclusive to me. Don’t you think you’re being a little paranoid? 😛

So I was re-listening to to the We’ve Got Worm podcast and it occurred to me that you would probably enjoy their Fugly Bob’s commercials. So these are them (and a bonus). These are from three different episodes.

(Apologies for the relatively low volume and choppy camera.)