So first off: Apparently I accidentally stopped one page too early despite knowing the url of the page I was supposed to go to. Whoops. That one’s all on me. My only excuse is that I was rushing a little at the very end because my boss suddenly wanted me at work an hour earlier than I’d expected.

1. Since you didn’t seem to recognize Incubus’s first costume change – it’s a reference to David Bowie in the 1986 film “Labyrinth”. Here’s the scene featuring the costume in question, you might want to just watch it, it speaks for itself:

Oh! It did look vaguely familiar (even though I haven’t seen Labyrinth) and very 80’s.

2. In reading through Abaddon’s Twitter & Tumblrs I found a note from a couple years ago where he said he’d only made it to early Act 6 of Homestuck. So probably no Aranea references.

That’s fair. I wasn’t really thinking of deliberate references anyway — I was more making references myself by comparing White Chain and Ciocie’s treatment of exposition to a particularly hilarious scene between Meenah and Aranea. (Warning: The scene linked is full of major Homestuck spoilers.)

As for taking it further by comparing Ciocie to Aranea as a blue, spidery storyteller, that’s just me amusing myself by comparing characters from different works, just like labeling Armsmaster as a Vriska and Trickster as a Karkat, or comparing Allison to Mat Cauthon. I’m not really suggesting anyone was based on / inspired by anyone else unless I explicitly say so, even with K6BD definitely having some Homestuck influence due to its origins.

3. Re: Juggernaut Star’s original character design, I’m not 100% sure on that one. The earliest pages of the comic were originally done in black & white and were later redone in color, and he did look really different originally. Comparison image: 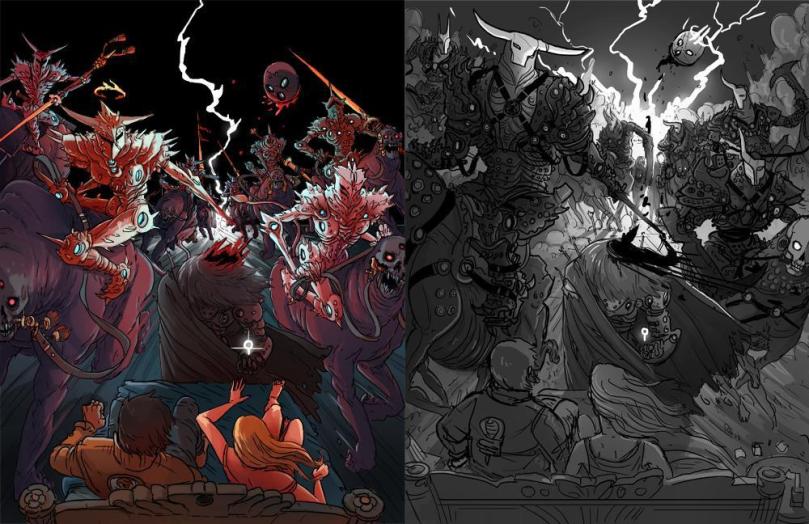 Interesting. Looks like Thorn angels got something of a redesign in general, perhaps to reduce confusion with devils (their helmets look a lot less like devil masks in the colorized version).

There’s also this concept art which is from after the black & white page but before Juggernaut’s formal introduction in book 2 and (I think) before the re-coloring of the opening pages: 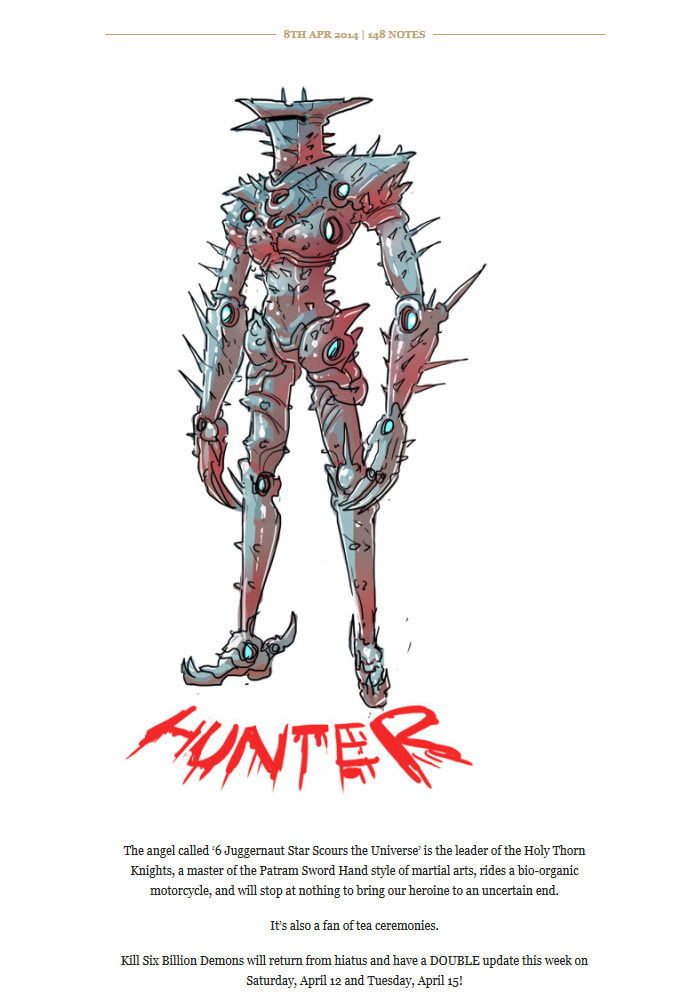 Huh. The head/helmet looks rather anvily here. It reminds me vaguely of Forge from Paranatural. 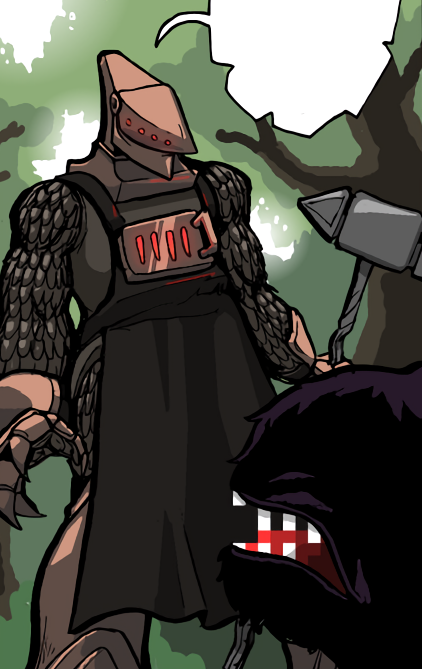 On another note, the flavor text for Juggernaut’s concept art uses “it” as their pronoun. Interesting.

On a slightly related note… some dialog on 3-22 was also removed/changed (RIP TsundereStar), original file is still on the server: 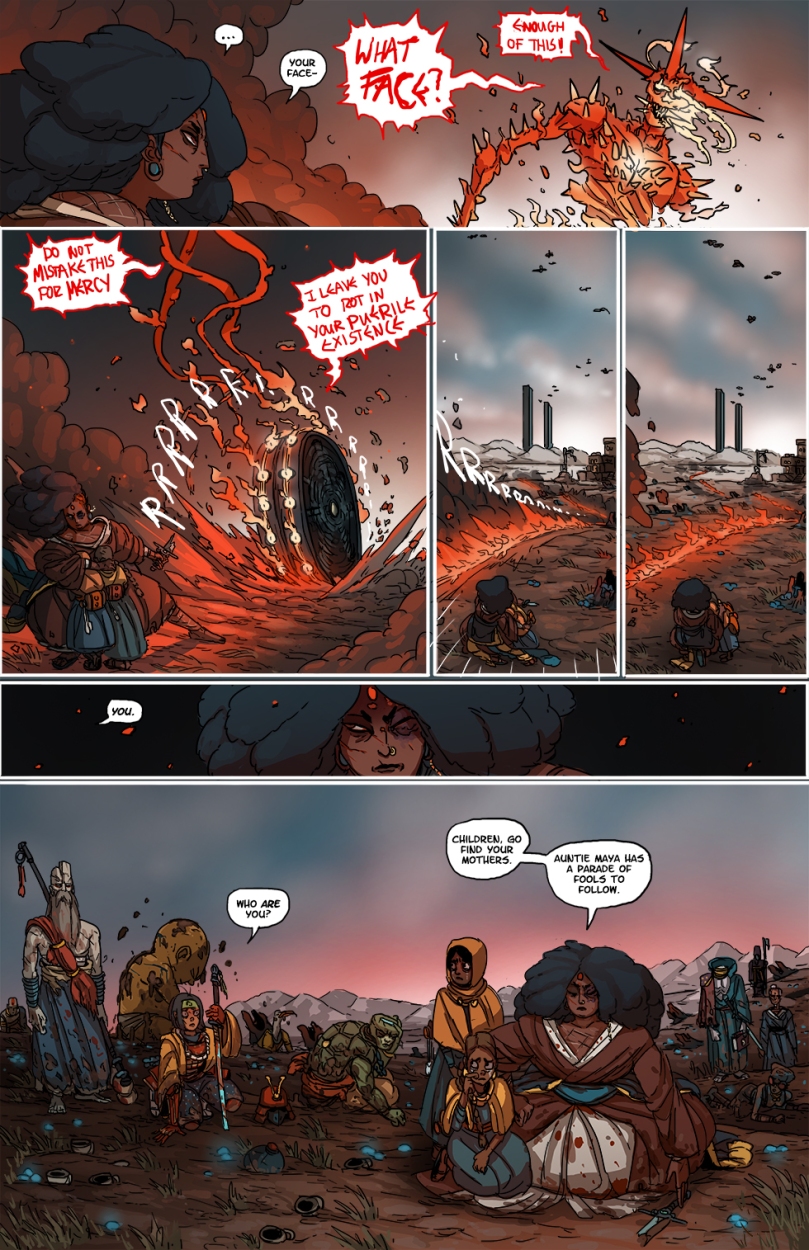 What face indeed. Yeah, Juggernaut Star is definitely hiding a flower beneath those thorns.

(And “puerile” is definitely an English word, by the way. I think your Google is being weird.)

And back on the subject of the earliest pages originally being black & white, there was one page that was removed instead of getting redone in color since it wasn’t strictly needed: 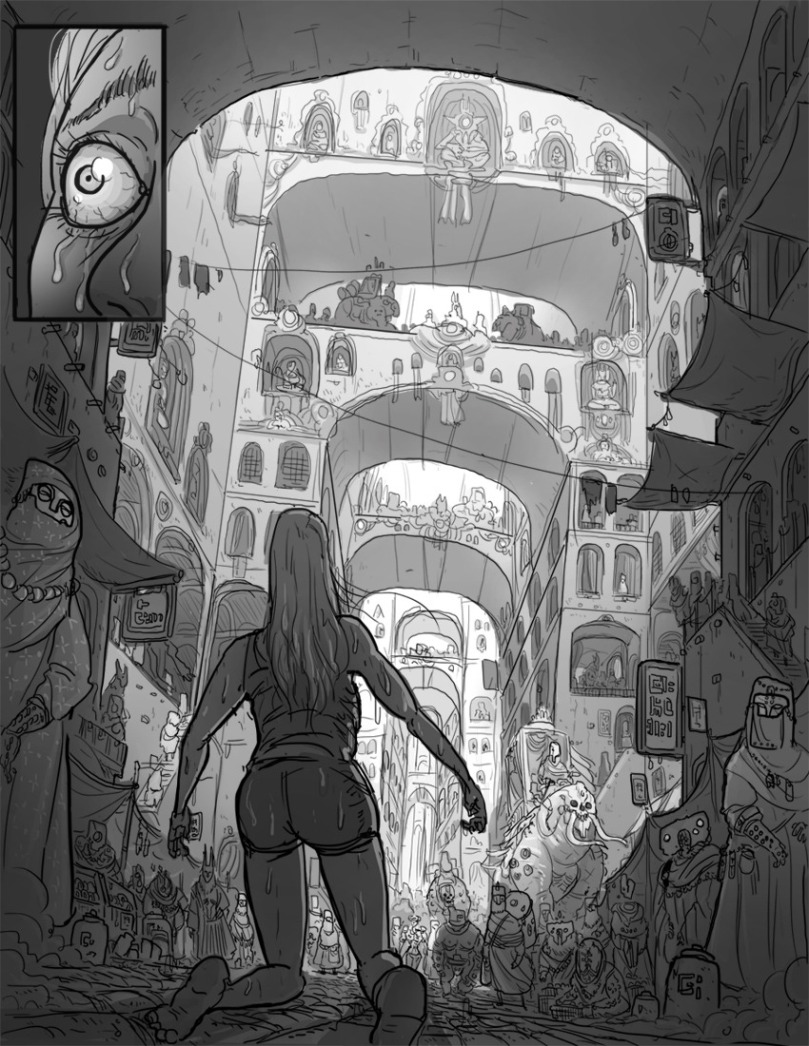 Aww, that would’ve been such a cool page to have in the final product. I can definitely understand not wanting to redo this one if they could do without it, though. Seems like a work-intensive one.

4. Mouseover text “They’re getting off the boat soon” – probably a reference the manga Berserk, where due to publication hiatuses & cutaways from the main plot, the ‘adventuring party’ was on a boat traveling to an island from 2009 until 2015 (maybe a month in-universe).

Comic time can be a hell of a thing sometimes. I’ve seen comics spending a year or two on one day’s worth of events before. One of those comics is nearly 18 years old and only about a year has gone by in-universe, and that’s with a six-month time skip in there.

5. Incubus’s throne room has a few instances (throne, banners) of the Chinese character for “middle”. If you ever re-read the comic keep an eye open for it as it has appeared before in at least a couple places. Also, the First Consort (who represented Incubus at the Demiurge meeting in book 1) appears to be hanging out in the background of the throne room.

I noticed the symbols in the throne room but didn’t think about the possibility of it having a meaning outside the comic. I just assumed it was Incubus’ symbol, and given his titles, that seems about right.

*waves to the First Consort*

6. You might find this amusing — Wiki article for the “mysterious stranger” from Cio’s book: 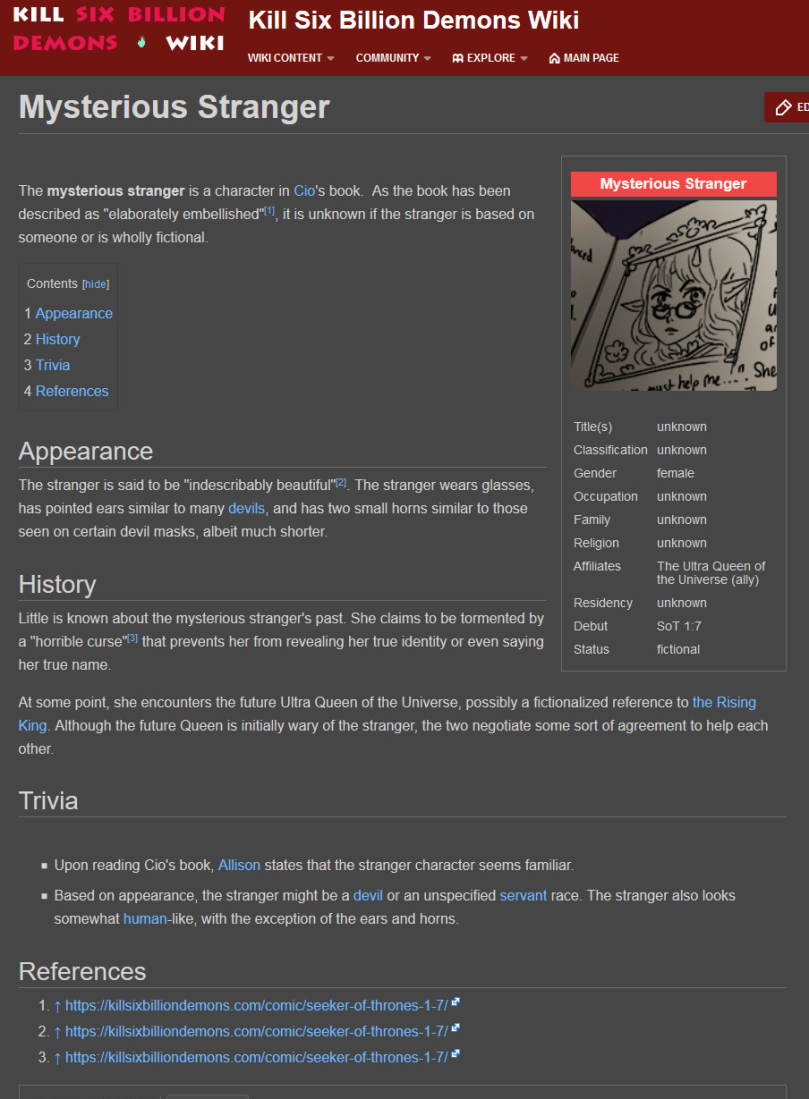 Now who in the world could this mysterious stranger be? 😮

Comparing barrel auntie to Mottom one might notice that no matter her current age the latter 1) has straight light shiny hair rather than coarse dull hair. 2) has no scar across her face. 3) has one smooth head stone not four clover shaped ones. 4) has no beauty mark over her mouth. 5) has golden eyes not red ones. 6) has darker skin. 7) Her face has a different shape. 8) Her wrinkles are in different places. 9) Her crown of power has a different symbol and color tint when it manifests.

Yeeeah… have I ever mentioned I’m bad with remembering faces and visual design details?

Although in this case I was kind of making some major allowances for the aging without the constant influx of the fruit of life setting in rapidly and changing things.

“The word’s fitting, though I didn’t think of Welsh as a possibility here.” You actually did, because Guinevere (which you alluded to with “Gwer…evere?”) is Welsh.

I didn’t count that because that was a joke and I’d forgotten about it.

“Unless they somehow wirelessly transmitted the movies through the hole and then burned them onto discs on the Earth-Bet end?” Krixwell, movies do not spontaneously materialize out of thin air whenever a movie is shot. Moreover, manually passing a whole production batch’s worth of DvDs through a hole one at a time would be prohibitively time-consuming. Also, human civilization has plenty of wireless methods of data transfer.

Yeah. Sorry, I didn’t mean to imply difficulty with that “somehow”.

And of course the alternative wouldn’t be passing a whole production batch through there. The introduction of the concept of Earth-Aleph made it clear that media from there is rare and it wasn’t easy to get your hands on.

1: Re your comments about Worm being a superhero deconstruction: If you’re speaking in tvtropes terms it’s more like a reconstruction. Worm has many superhero tropes, but there is always a reason why it’s this way. Why are the villains not unmasked? Unwritten rules and they occasionally are. Why isn’t supertech used by everyone? Being a gadget genius is genuine superpower with many limitations. The tech can mostly only used by the tinker themselves effectively.

2: Why are the muggles tolerating the supers duking it out all the time? Because only they can fight the kaijus, which also explains why capes are so seldom killed. You need the bodies to throw at the Endbringers because of sheer attrition. Of course Worm does many things more realistically than e.g. MCU. If there is a city destroying monster, there will be consequences. Compare Brockton Bay before and after Leviathan and New York in the MCU before and after an alien invasion.

3. Peter Parker is supposed to be bullied in school? Without marginalizing it, does it *really* has any big effect on him? In Worm the bullying has an effect until Taylor suffers a psychotic break after which she befriended a group of supervillains because they are the first people to be a tiny bit nice to her and rationalized it away as undercover mission. Why does nobody kill the Joker, e.g. a cop who finally had enough and takes one for the team? In Worm literally everybody tries to kill Jack

That’s a fair point. In a similar vein, Worm deconstructs the idea of heroes by having the heroes be deeply flawed or outright bad and not necessarily the benefit to society they seem to be, but then takes the pieces and reconstructs it by having those operating under the villain label (particularly Taylor) take the role of heroes through villainous means.

Since you’re Norwegian do you ever see Ylvis around town or at the grocery store or something? If you see them can you tell them I still like their stuff & we didn’t all just listen to that one song & then forget about them? Tell them that Old Friends is their best song in my opinion but say it in third person obviously and maybe say it in Norwegian if you want to, I don’t care.

Yeah, um, about that. Norway may be small, but it’s not that small, plus I live out of the way. They’re not exactly likely to drop by the store I work at, sorry.

Though I do know they’ve had a concert in my hometown at one point, so they’re not completely foreign to my region. As far as I can tell, though, they’re currently living in Oslo (below the lowercase n in “Norwegians” on the map).

There’s an audio file (alternative locally hosted version for posterity) that has slipped through a few cracks in the last two Between posts. First Sharks forgot to send it to me, and then I put a placeholder in the last Between post because I wasn’t sure if I should react to it, and Sharks was asleep… and then forgot to actually ask Sharks and replace the placeholder with anything before posting it. Whoops.

And then Sharks didn’t actually answer whether I should or not, so I played it safe…

And oh my cod I am so glad I reacted to this.

(The mishap with the placeholder also made me realize I can embed audio files, so that’s neat… hey, I wonder if I can do the same with videos and eliminate the middleman of YouTube? Something to test, that.)